Serious questions need to be asked about the likely level of future demand growth for oil and auto sales in Emerging Markets (EMs), as I describe in my latest post for the Financial Times, published on the BeyondBrics blog 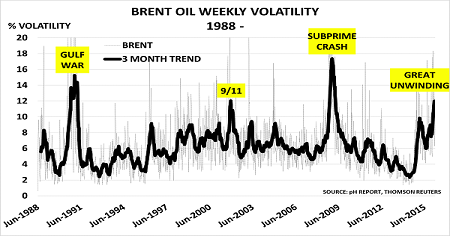 Oil market volatility has reached near-record levels in H1 this year, as the first chart shows. It has averaged nearly 10% a week, and over the past quarter-century its three-month average has only been higher during the Gulf War and the subprime crash. Yet there have been no major supply disruptions or financial shocks to justify such a dramatic increase. Instead, July’s report from the International Energy Agency reminds us that:

“OECD commercial inventories built by 13.5 mb in May to end the month at a record 3 074 mb. Preliminary information for June suggests that OECD stocks added a further 0.9 mb while floating storage has continued to build, reaching its highest level since 2009.”

The problem is two-fold:

New data from the US Energy Information Agency (EIA) confirms Saudi Arabia’s need for a change of direction, as the chart shows. The EIA’s reference case scenario out to 2040 suggests that US energy consumption will increasingly be led by natural gas and renewables, and notes that

“Petroleum consumption remains similar to current levels through 2040, as fuel economy improvements and other changes in the transportation sector offset growth in population and travel.”

Nor are these trends confined to the US. As Nick Butler has argued recently in the FT, conventional forecasts of ever-rising energy demand driven by rising populations and rising prosperity in the EMs appear far too simplistic. Instead, as he notes: “Demand has stagnated and in some areas is falling.”

Developments in the transportation sector (the largest source of petroleum demand), confirm that a paradigm shift is now underway along the whole value chain. As Dan Amman, president of GM, highlighted in the FT last year, when discussing the value proposition for city dwellers of buying a new car: 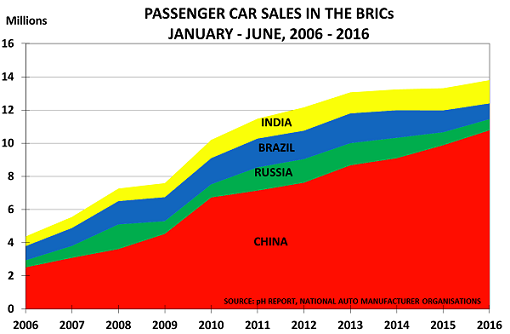 China’s slowdown confirms the depth of the challenge to conventional thinking about future auto and oil demand. Many still assume that EMs will account for two thirds of global auto sales by 2020, and underpin future oil demand growth. But the China-induced collapse of commodity export revenues in formerly high-flying economies such as Brazil and Russia means that this rosy scenario is also in need of major revision.

As noted last November, Brazil was temporarily the world’s fourth largest auto market in 2013, whilst Russia was forecast to reach fifth position by 2020. But as the chart of H1 sales in the BRIC countries shows, volumes in both countries have almost halved since then. China’s own sales growth is also slowing, as the government’s need to combat pollution has led it to focus on implementing policies aimed at boosting the role of car sharing and public transport – while its focus on electric vehicles is a further downside for future oil demand.

As we move into H2, it therefore appears that the fundamental assumptions behind the $3tn of energy market debt – $100/bbl oil and double-digit economic growth in China – are looking increasingly implausible. And given oil’s pivotal role in the global economy, today’s near-record levels of oil market volatility may also be trying to warn us that wider problems lie ahead for financial and energy markets.