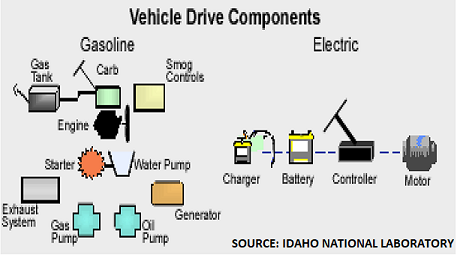 Major disruption is starting to occur in the world’s largest manufacturing industry.  Hundreds of thousands of jobs will likely be lost in the next few years in auto manufacturing and its supply chains, as consumers move over to Electric Vehicles (EVs).

As the chart from Idaho National Laboratory confirms, EVs have relatively few parts – less than 20 in the drive-train, for example – versus 2000 for internal combustion engines (ICEs).  There is much less to go wrong, so many servicing jobs will also disappear.

The auto industry itself was the product of such a paradigm shift in the early 19th century, when the horse-drawn industry mostly went out of business.  Now it is seeing its own shift, as battery costs start to reach the critical $100/kWh levels at which EVs become cheaper to own and operate than ICEs. 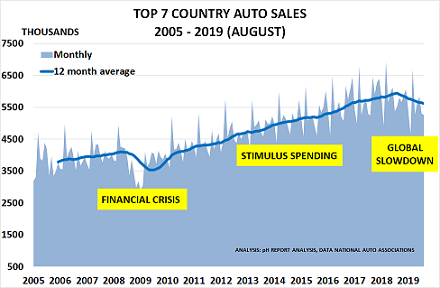 Unfortunately, this paradigm shift is coming at a time when global sales and profits are already falling. As the chart shows, sales were down 5.4% in January-August in the Top 7 markets versus 2018. And in the Top 6 markets, outside China, they were only 4% higher than in 2007, highlighting the industry’s current over-dependence on China: 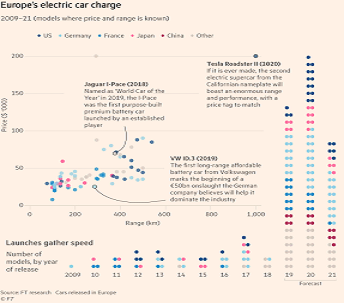 EV sales, like those of used cars, are heading in the opposite direction. China currently accounts for 2/3rds of global EV sales and sold nearly 1.3m EVs in 2018 (up 62% versus 2017). They may well take 50% of the Chinese market by 2025, as the government is now focused on accelerating the transition via the rollout of a national charging network.

Interestingly, it seems that Europe is likely to emerge as the main challenger to China in the global EV market. The US has Tesla, which continues to attract vast investment from Wall Street, but it is only expected to produce a maximum of 400k cars this year. Europe, however, is ramping up EV output very fast as the Financial Times chart confirms:

One key incentive is the manufacturers’ ability to use EV sales to gain “super-credits” in respect of the new mandatory CO2 emission levels. These are now very valuable given the loss of emission credits due to the collapse of diesel sales.

“There’s only going to be a few winners who create the platforms for the future.”

VW NOW HAVE BATTERY COSTS AT BELOW $100/kWh
VW is likely to be one of the Winners in the new market.  It is planning an €80bn spend to produce 70 EV models based on standardised motors, batteries and other components.  This will enable it to reduce costs and accelerate the roll-out:

The key issue, of course, is battery cost. $100/kWh is the tipping point at which it becomes cheaper to run an EV than an ICE. And now VW are claiming to have achieved this for the ID.3 model.

Once this becomes clearly established, EV sales will enter a virtuous circle, as buyers realise that the resale value of ICE models is likely to fall quite sharply.  Diesel cars have already seen this process in action as a result of the “dieselgate” scandal – they were just 31% of European sales in Q2, versus 52% in 2015 .

One other factor is likely to prove critical. The media hype around Tesla has led to an assumption that individuals will lead the transition to battery power.  But in reality, fleet owners are far more likely to transition first:

The problem for auto companies, their investors and their supply chain, is that the disruption caused by the paradigm shift will create a few Winners – and many Losers – as Ford warned.

Those who delay making the investments required are almost certain to become Losers.  The reason is simple – if today’s decline in auto sales accelerates, as seems likely,  the investment needed for EVs will simply become unaffordable for many companies.