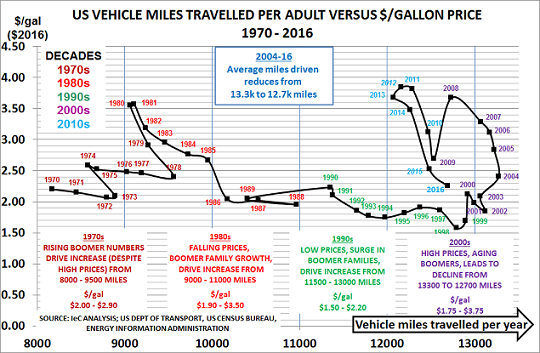 OPEC has a long wait ahead, if it hopes that US drivers will ever go back to SuperCycle levels of driving and gasoline consumption growth.  That’s the clear message from new data from the US Dept of Transport showing vehicle miles traveled last year.  The chart shows:

□  Average number of miles driven per adult American since 1970 (using over-16 as the normal legal driving age)
□  Average US gasoline price in $/gallon, adjusted for inflation

At the same time, US cars have also become more fuel efficient thanks to EPA regulations.  Miles/gallon has increased by 28% since 2004 in terms of each model year, even though there has recently been a boom in larger, less fuel-efficient, Sports Utility Vehicle sales.  Thus although US gasoline demand hit a new record volume of 9.2mb/day in 2016, the combination of increasing fuel efficiency as older cars are scrapped, plus the continuing decline in miles/driven per adult, suggestes that the best days of the market are behind it.

In addition, of course, major changes are now underway in the US market for mobility.  Whilst some people obviously like cars and want to own them, most purchases are because people need to be mobile.  In the past, cars were often the only option as US public transport options were relatively limited, particularly for Boomers who had chosen to escape the inner cities and move out to the suburbs.  They often needed more than one car to transport the family.

Today, however, the Boomers are driving less as they move into retirement, and are moving back to the cities, whilst the Millennials have much less interest in moving to the suburbs.  Both Boomers and Millennials also have other options, such as social media, for meeting up with friends. As a PRIG study has noted, the number of households:

So market conditions are far more favourable for new business models.  Nobody yet knows if car-sharing, or Uber and Lyft type services, or autonomous cars, will prove successful.  Nor do we know if the electric cars being developed by GM, Ford, Chevrolet, Tesla and others will prove successful.  But what we do know is that gasoline consumption has almost certainly peaked in the US.  As the President of GM, Dan Ammam, suggested last year:

“We think there’s going to be more change in the world of mobility in the next five years than there has been in the last 50 years”.

It is also hard to disregard the argument of Ford’s chairman, Bill Ford, who argued in his 2011 TED talk that current driving habits would inevitably lead to gridlock, as:

“The average American spends about a week a year stuck in traffic jams, and that’s a huge waste of time and resources….

OPEC might have felt able to ignore Ford’s commentary back in 2011.  But today, the growth of car-sharing, Uber and Lyft, electric cars and autonomous vehicles suggests it would be unwise for it to ignore the major changes underway in the world’s largest single market for gasoline.