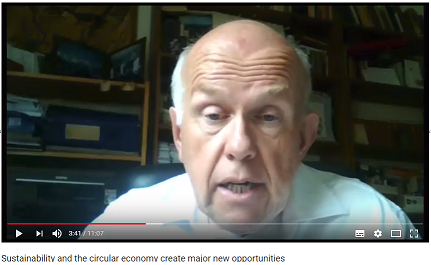 My new interview with Will Beacham, deputy editor of ICIS Chemical Business, focuses on both these key issues and suggests they will create Winners and Losers.

The new US product will likely change the global market. Its ethane feedstock is essentially a distressed product, which has to be removed to enable the shale gas to be sold.  It is also clear that this 40% expansion of USA polyethylene capacity, around 6 million tonnes, cannot be sold into the US domestic market, which is already very mature:

We have seen price wars before, and the “Winners” are usually the integrated producers, who can roll through margins from the well-head or the refinery into ethylene and polyethylene sales. 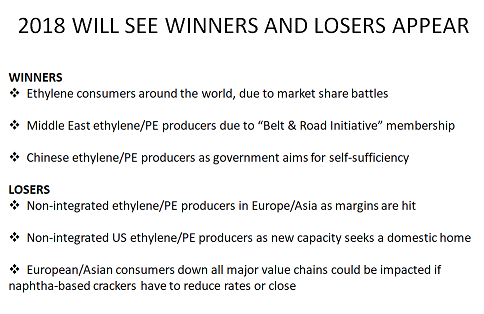 As the chart shows, this development will be good news for ethylene consumers.  As Huntsman CEO, Peter Huntsman noted a year ago:

In turn, of course, this will pressure other plastics via inter-polymer competition

Non-integrated producers clearly face more difficult times.  And like the integrated producers, they share the challenge being posed by the rise of sustainability concerns, particularly over the 8 million tonnes of plastic that currently finds its way into the oceans every year. 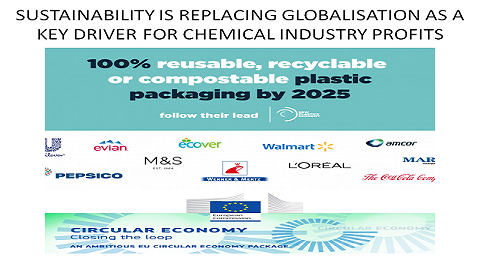 This issue has been building for years, and clearly consumers are now starting to demand action from brand owners and governments.

In turn, this opens up major new opportunities for companies who are prepared to realign their business models with the New Plastics Economy concepts set out by the Ellen MacArthur Foundation and the World Economic Forum.

The New Plastics Economy is a collaborative initiative involving leading participants from across the global plastic packaging value chain, as the second chart illustrates.  It has already prompted action from the European Union, which has now set out its EU Strategy for Plastics in the Circular Economy.  This aims to:

“Transform the way plastics and plastics products are designed, produced, used and recycled. By 2030, all plastics packaging should be recyclable. The Strategy also highlights the need for specific measures, possibly a legislative instrument, to reduce the impact of single-use plastics, particularly in our seas and oceans.”

Clearly this represents a paradigm shift for the industry, both producers and consumers.

It may seem easier to do nothing, and to hope the whole problem will go ahead.  But the coincidence of the arrival of all the new US shale gas capacity makes this an unlikely outcome.  Companies who do nothing are likely instead to become Losers in this rapidly changing environment.

But as I discuss in the interview, companies who are prepared to rethink their business models, and to adapt to changing consumer needs, have a potentially very bright future ahead of them.  Please click here to view it.

The post 2018 will see Winners and Losers appear in plastics markets appeared first on Chemicals & The Economy.