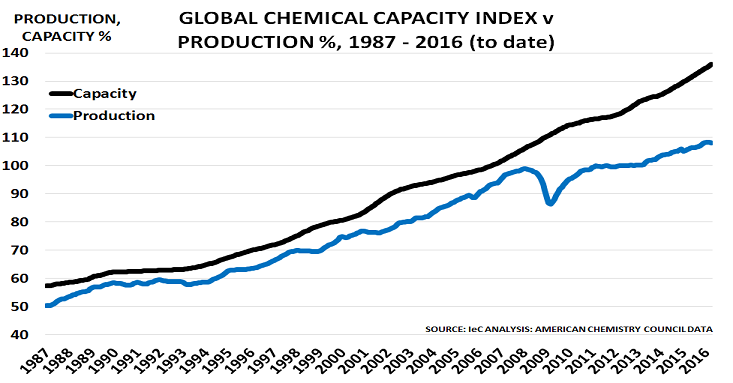 Global demand is continuing to slow, yet chemical industry capacity is continuing to ramp up.  As a result, supply gluts are likely to appear in many key areas as we move into the second half of the year.  That is the key conclusion from the latest American Chemistry Council data for global chemical capacity and production.

Oil prices have risen around 87% since mid-January, when Brent bottomed at $27/bbl.  So there has been an enormous incentive for buyers to build inventory.  But this rise has not been due to any shortages – inventories are in fact at near-record levels.  Instead, it has been due to pension/hedge fund speculation over the outlook for US interest rates and hence the value of the US$.

This highlights, as the chart above shows, how the global chemical industry has been fooled for the past 5 years by the central banks.  They have kept telling us that demand is about to return to previous SuperCycle levels: 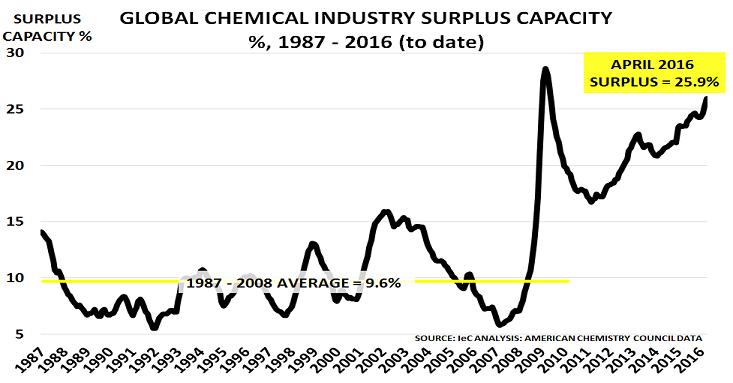 This means that H2 could be very difficult indeed, if the pension/hedge funds decide to reverse their strategies:

But now this game is likely over, as the Fed has recovered its nerve.  Fed Chair, Janet Yellen, gave strong hints on Friday that interest rates were likely to rise in June or July.  So we may well see the US$ rise again

In turn, buyers will then likely start to destock into the seasonally weak Q3 period, as oil and commodity prices fall.  Prudent companies urgently need to develop plans to mitigate the impact of this reversal.

But this will not be easy – as the second chart shows, surplus capacity was already at 25.9% in April – more than twice the average 9.6% level seen in the SuperCycle.

WEEKLY MARKET ROUND-UP
My weekly round-up of Benchmark prices since the Great Unwinding began is below, with ICIS pricing comments:
Brent crude oil, down 53%
Naphtha Europe, down 52%. “France refinery strike has minimal impact on naphtha”
Benzene Europe, down 57%. “A steady flow of imports combined with less consumption in May has seen prices move lower”
PTA China, down 41%. “Plants within 50km of G20 meetings in Hangzhou have been confirmed to be reducing run rates or shutting down their units during that period, while plants within 100km of the meeting locations, such as those in Ningbo or Dalian, continue to be in discussions with authorities on operating statuses. Those within 300km of the meeting locations will shut or reduce run rates for a shorter period of time”
HDPE US export, down 29%. “China’s imported prices were continuing to drop in the week”
¥:$, down 8%
S&P 500 stock market index, up 7%