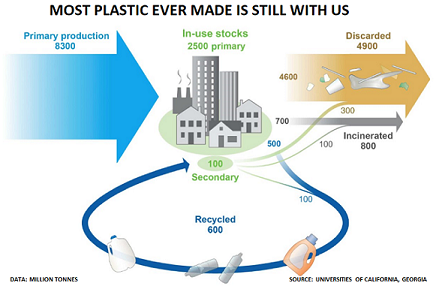 The Stone Age didn’t end because we ran out of stones.  Similarly, coal is being left in the ground because we no longer need it any more.  And the same is happening to oil, as Saudi Arabia recognised last year in its Vision 2030:

“Within 20 years, we will be an economy that doesn’t depend mainly on oil“.

And so now the debate is moving on, to products such as plastics that are made from oil.

The move began several years ago with the growing concern over plastic bags.  Consumers decided they no longer wanted to live in a world filled with waste bags.  Now, in a landmark new Study*, the debate is evolving to focus on the question of ‘What happens to plastic after we have used it?’   As the chart shows:

  The world has produced 8.3bn tonnes of plastic over the past 60 years
  Almost all of it, 91% in fact, has since been thrown away, never to be used again
  But it hasn’t simply disappeared, as plastic takes around 400 years to degrade
  Instead, the Study finds, 79% is filling up landfills or littering the environment and “at some point, much of it ends up in the oceans, the final sink”

Nobody is claiming that this waste was created deliberately.  Nobody is claiming that plastics aren’t incredibly useful – they are, and they have saved millions of lives via their use in food packaging and other critical applications.  The problem is simply, ‘What happens next?’  As one of the Study authors warns:

“We weren’t aware of the implications for plastic ending up in our environment until it was already there. Now we have a situation where we have to come from behind to catch up.” 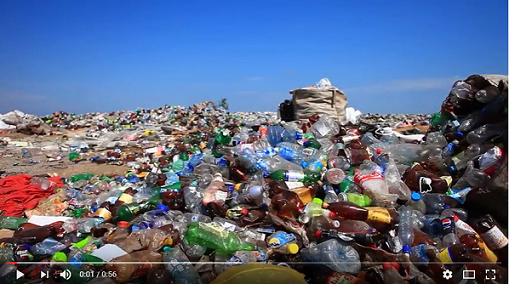 The good news is that potential solutions are being developed.  As the video shows, Recycling Technologies, for example (where I am a director), is now trialling technology that will recycle end-of-life plastic into virgin plastic, wax and oils.  Other companies are also hard at work on different solutions.  And more and more effort is focused on finding ways of removing plastic from the sea, as I noted last year:

 “95% of plastic packaging material value is currently lost after just a short first-use cycle
  By 2050, there will be more plastics in the ocean than fish by weight, if current policies continue
  Clearly, this state of affairs cannot be allowed to continue.”

SUSTAINABILITY IS REPLACING GLOBALISATION AS A KEY DRIVER FOR THE ECONOMY
But there is another side to this debate that is just about to move into the headlines.  That is the simple question of “How do we stop putting more and more plastic into the environment?”  Cleaning up the current mess is clearly critically important.  But the world is also starting to realise that it needs to stop creating the problem in the first place.

As always, there are a number of potential solutions potentially available:

  The arrival of 3D printing dramatically reduces the volume of plastic needed to make a finished product.  It operates on a very efficient “additive basis”, only using the volume that is needed, and producing very little waste
  Digitalisation offers the opportunity to avoid the use of plastics – with music, for example, most people today listen via streaming services and no longer buy CDs made of plastic
  The ‘sharing economy’ also reduces demand for plastic – new business models such as car-sharing, ride hailing and autonomous cars enable people to be mobile without needing to own a car

The key issue is that the world is moving to adopt the principles of the circular economy as the Ellen MacArthur Foundation notes:

This paradigm shift clearly creates major challenges for those countries and companies wedded to producing ever-increasing volumes of plastic.  OPEC has an unpleasant shock ahead of it, for example, as its demand forecasts are based on a belief that:

“Over one-third of the total demand increase between 2015 and 2040 comes from the road transportation sector (6.2 mb/d). Strong growth is also foreseen in the petrochemicals sector (3.4 mb/d)”

They are forgetting the basic principle that, “What cannot continue forever, won’t continue“.  After all, it took just 25 years for cars to replace horses a century ago.  More recently, countries such as China and India went straight to mobile phones, and didn’t bother with landlines.  And as I noted last year, underlying demand patterns are also now changing as a result of today’s ageing populations:

  In the BabyBoomer-led SuperCycle, the growing population of young people needed globalisation in order to supply their needs. And they were not too worried about possible side-effects, due to the confidence of youth
  But today’s globally ageing populations do not require vast new quantities of everything to be produced. And being older, they are naturally more suspicious of change, and tend to see more downside than upside 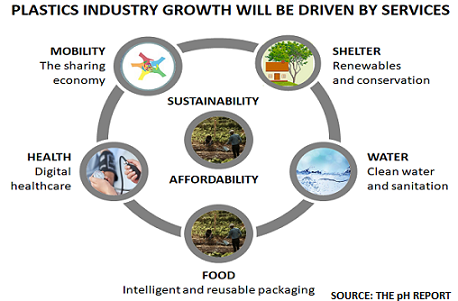 Of course, change is always difficult because it creates winners and losers.  That is why “business as usual” is such a popular strategy.  It is therefore critically important that companies begin to prepare today to be among the winners in the world of the circular economy. As we all know:

There is no such thing as a mature industry, only mature firms. And industries inhabited by mature firms often present great opportunities for the innovative”.

As the 3rd chart shows, the winners in the field of plastics will be those companies and countries that focus on using their skills and expertise to develop service-based businesses.  These will aim at providing sustainable solutions for people’s needs in the fields of mobility, packaging and other essential areas. The losers will be those who bury their heads in the sand, and hope that nothing will ever change.

* The detailed paper is in Science Advances, ‘Production, use, and fate of all plastics ever made‘