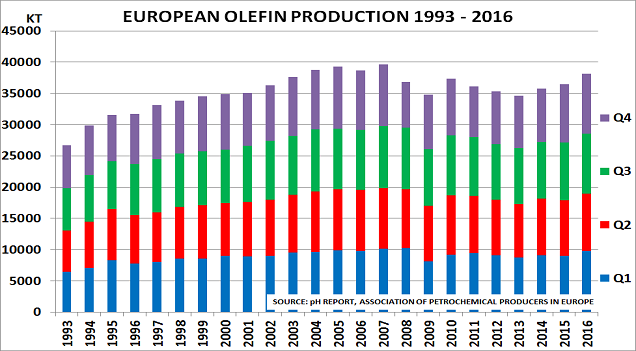 The financial crisis began a decade ago, yet production of the key “building block products” for the European petrochemical industry has still not recovered to its pre-Crisis peak, as the chart shows (based on new APPE data):

Olefins are used in a very wide variety of applications including plastics, detergents, textiles and paints across the European economy.   The data therefore highlights the slow and halting timeline of the recovery – despite all the trillions of money-printing by the European and other central banks, and all the government stimulus programmes. 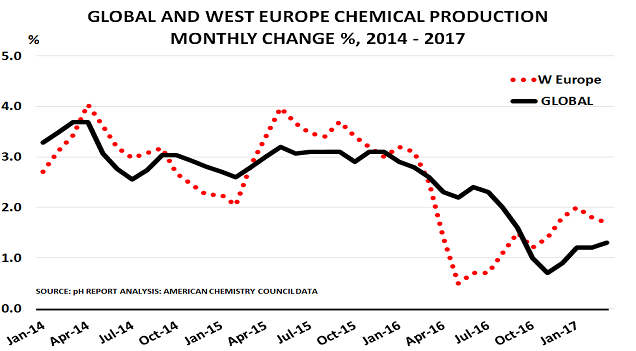 Worryingly, new data from the American Chemistry Council suggests that a new downturn may be underway in W Europe, as the second chart shows:

  Output had been growing steadily at around 3%/year from 2014 to early-2016
  But then it began to slide.  It was just 0.5% in May, and only recovered to 2% in January – normally one of the seasonally strongest months in the year

This report is confirmed by Q1 results from BASF, the world’s largest chemical company.  It cautioned that volumes were only slightly up compared to Q1 2016, despite “a sharp increase in prices for raw materials” due to the rise in oil prices.  This is particularly worrying as demand was artificially inflated in Q1, due to many companies building inventory as the oil price rose following November’s OPEC/non-OPEC deal.

The issue is that oil prices are a critical factor along the entire value chain.  Even retailers follow the oil price very closely, and every purchasing department aims to second-guess its direction, whether upwards or downwards. They buy ahead when they believe prices are rising, and leave purchases as late as possible when prices are falling.

This behaviour has a counter-intuitive impact on the market. Instead of demand reducing when prices rise, it actually appears to be increasing as companies build inventory. Thus producers are lulled into a false sense of security as price increases appear to have no impact on demand. But when oil prices are thought to have stabilised, volume then starts to reduce as buyers reduce their inventory to more normal levels.

The impact over a full cycle is, of course, neutral. But on the way up, apparent demand can often increase by around 10% and then fall by a similar amount on the downside, accentuating the basic economic cycle.

The European economy already faces a number of major headwinds due to the rise of the Populists and the UK’s Brexit decision to leave the European Union.  Now the APPE and ACC data suggests that overall demand has actually been slowing for the past 9 months. And it is likely that underlying demand today is now slowing even more as companies along the value chain destock again as the oil price weakens.

Prudent CEOs and investors will no doubt already be preparing for a potentially difficult time in H2 this year.