Skip to content
Home / 4.5 million tonnes of new US polyethylene exports on front-line as War of Words hits US-China trade 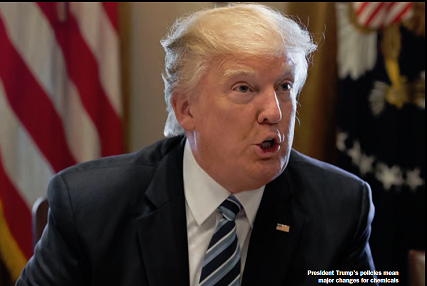 “There isn’t anybody who knows what is going to happen in the next 12 months. We’ve never been here before. Things are out of control. I have never seen a situation like it.” This comment last month from former UK Finance Minister, Ken Clarke, aptly summarises the uncertainty facing the global economy.

As I note in a new analysis, major policy changes are now underway in both the US and China – the world’s two largest economies. Almost inevitably, they will create structural changes in the petrochemicals and polymers industry. These changes will not only impact the domestic US and Chinese economies. They will also impact every supply chain which has a link into either economy.

Half of Apple’s iPhones, for example, are currently made in the Chinese city of Shenzhen, using products from over 200 suppliers from around the world. Under President Trump’s new “America First” policies, it is highly likely that in the future, more and more iPhones will instead start to be made in the US.

This highlights how the world is now moving into the early stages of a “War of Words” scenario, where both the US and China are preparing to develop a totally new trading relationship:

  Will this develop into an all-out “Global Trade War” scenario, as the new chairman of President Trump’s National Trade Council, Peter Navarro, has been advocating? This was the key message of his 2006 book, “The Coming China Wars: Where They Will Be Fought, How They Can Be Won”?
  Will President Trump go ahead with his proposed 35% border tax on imports into the US?
  Or will the two sides negotiate a less confrontational trading relationship that still takes account of the president’s desire to reshore manufacturing to the US?

Nobody can know at the moment. But we do know that China’s President Xi is equally determined to push forward with his reforms for the domestic Chinese economy. He also seems to have finally sidelined Premier Li Keqiang, who has been responsible for economic policy until now. This is a critically important development, as Li has masterminded the stimulus policies that meant China became the key driver for global growth in recent years.

Instead, Xi is determined to refocus on his $6tn “One Belt, One Road” (OBOR) project – which absorbed $450bn of start-up finance last year. OBOR creates the potential for China to lead a new free trade area including countries in Asia, Middle East, Africa and Europe – just as the US appears to be withdrawing from its historical role of free trade leadership.

It is hard to over-estimate the potential importance of these changes. As President Trump said in his recent Inauguration speech, his aim is to completely overturn the framework that has governed the global economy during our working lives.

Today’s business models based on global supply chains are therefore under major threat, and companies probably have very little time to develop new ones. It seems most unlikely, for example, that the globalisation model of recent decades – whereby raw materials are routinely shipped half-way around the world, and then returned as finished product – will survive for much longer. Companies and investors also have to prepare for the risk that today’s moves are only the start of a more profound shift in the global economy.

The current “War of Words” on trade could well evolve into outright protectionism, with countries reimposing the trade barriers of the pre-globalisation era. 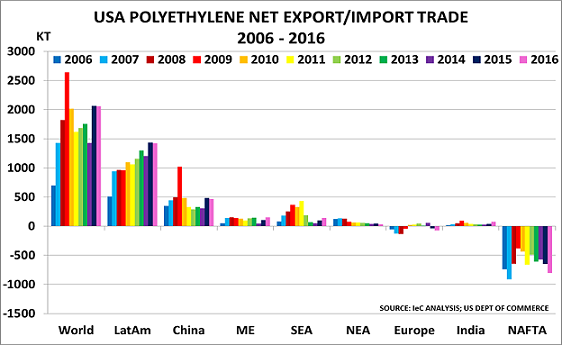 The imminent start-up of 4.5m tonnes of new North American polyethylene (PE) capacity confirms the scale of the potential challenges ahead. As the chart highlights:

 US net exports in 2016 were 5,000 tonnes lower than in 2015
 Normally, one would have expected them to be ramping up in advance of the new capacity coming on line
 Even more worrying is that they were 22% lower than their 2009 peak
 Exports to China were down by 50% due to its self-sufficiency having increased

The scope for disappointment later this year – and in turn the potential for the “War of Words” to be replaced by a “Global Trade War” – is obvious.

I analyse the risks in a new feature article for ICIS Chemical Business with John Richardson.  Please click here to download a copy (no registration required)