The appalling tragedy in India reminds us that the Covid pandemic is very far from being solved. And more generally, the latest Ipsos ‘What worries the world’ global poll shows high levels of concern over unemployment, inequality, corruption and crime. 2/3rds of people think their country is heading on the wrong track:

Interestingly, though, issues such as immigration and terrorism rank relatively low in the list – despite the attention they are given by many politicians and sections of the media.

THE FRENCH AND GERMAN ELECTIONS WILL BE THE NEXT BIG TEST 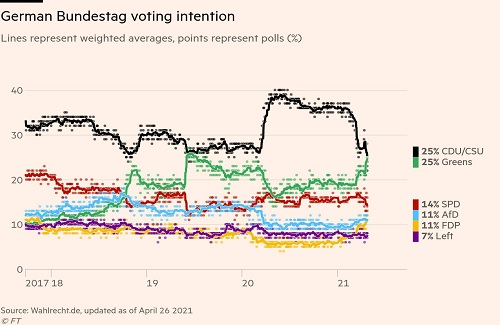 President Biden marked his first 100 days in office last month, and is moving quickly to focus on the concerns of working families.  He has already chalked up a major achievement with his $1.9tn American Recovery Plan Act, and is now focused on the more ambitious $2.3tn American Jobs Plan.

After the tumult of the Trump era, Americans seem to have happily moved back into a more settled state, where Biden makes no claim to dominate the media. His approval ratings have been remarkably steady since the inauguration, and are currently around 60%, whereas Trump’s never rose above 45.5% as he focused on energising his base.

Biden’s success in rolling out his Covid-19 vaccination programme has been the most visible measure of the transition in progress. It has clearly helped to rebuild the image of Presidential competence which was lost in the Trump years. But as Politico note:

“What remains to be seen is whether the trend will hold true in the two biggest European elections of the next 12 months. Germany’s general election in September and France’s presidential vote in April 2022. In both cases, the electorates are restless. Germans are angry about sleaze. The French are furious about the shortage of vaccines.”

Germany’s election on 26 September is a critical moment, as it will mark the end of Angela Merkel’s 16-year dominance of German and European politics. She saw her role as providing “a safe pair of hands”. And whilst this provided valuable reassurance at critical moments, it also meant she failed to provide the leadership that was really required.

As a result, it currently seems that the most likely result is a CDU/CSU/Green coalition for the first time in German history. But the CDU/CSU’s messy nomination process has already boosted support for the Greens’ Annalena Baerbock, who could well become the first Green Chancellor as the second chart shows.

Her election would clearly increase the momentum behind the EU’s net-zero climate target. And either way, the result will also impact the French election, where polls suggest President Macron is currently neck-and-neck with the populist Marine le Pen at 25%.

The pandemic has reminded the voters that competence and leadership matter in government. The coming two big EU elections will provide further clues as to how far these factors carry over into voters’ priorities.